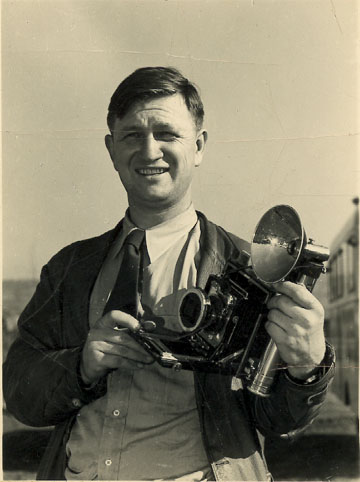 Member of
Russell Lee
Description
The Russell Lee Collection came to The Wittliff Collections through donations since 1986 by Jean Lee, Bill Wittliff, Dow Chapman and Wally Ellinger. This collection of photographs, correspondence, personal and legal documents, artifacts, paintings and publications ranges in date from 1901-1991, the bulk of the material dates from 1936-1942.
Note

Russell Lee was born on July 21, 1903, in Ottawa, Illinois. His parents' divorce, the death of his mother, and supervision by three successive guardians created an unsettled childhood for Lee. In 1917 he was sent to Culver Military Academy (CMA), which provided some stability in his life, and graduated in 1921. He graduated from Lehigh University in 1925 with a degree in chemical engineering and joined the Certainteed Products Company in Marseilles, Illinois. In 1927 he married painter Doris Emrick. The following year, Lee was transferred to Kansas City, where he became so bored with his job he resigned to pursue painting. After moving to San Francisco in 1929, the Lees resettled a year later in an artist’s colony in Woodstock, New York.

While a painter living in Woodstock, New York, Russell Lee purchased his first camera, a 35mm Contax, in 1935 to aid him in his painting and draftsmanship. He explored the technical aspects of the craft, experimenting with developing chemicals, exposure speeds, and flash photography techniques.He went to Pennsylvania to photograph bootleg coal miners. The winter of 1935 found him in New York City documenting the poor and their living conditions. Shortly after, he acquired an agent and began selling his work to magazines.

Farm Security Administration
In 1936, Lee joined the photographic staff of the Resettlement Administration, later renamed the Farm Security Administration (FSA), where he worked under the creative supervision of Roy Stryker, director of photographic projects. His colleagues included Dorothea Lange, Arthur Rothstein, Walker Evans, and Carl Mydans. During his FSA years, Lee traveled throughout the United States, documenting life in rural and urban communities. He developed a flash technique that enabled him to take innovative and candid interior photographs. He also specialized in taking pictures in series, most notably those shot in Pie Town, New Mexico, and San Augustine, Texas. Like most of his colleagues, Lee shot both 35mm and medium format film for the FSA. His FSA negatives are currently at the Library of Congress.

The long periods away from his wife while working for the FSA contributed to their divorce in 1938. On assignment in New Orleans the same year, he met Jean Smith, a Dallas journalist. They began working together and eventually married.

In 1942, shortly after the bombing of Pearl Harbor, and the United States’ entry into World War II, Russell Lee left the FSA/OWI and joined the Overseas Technical Unit of the Air Transport Command (ATC), where he received a captain’s commission. The Overseas Technical Unit was created to photograph the routes and airfields flown by the ATC. Frequently, American pilots flew into airspace completely unfamiliar to them, often while maintaining radio silence. Pilots and crew alike experienced difficulty in remembering details of long briefings prior to flight, so a unit of professional photographers was assembled to provide these pilots and their crew with images to aid in their meticulous briefings. A B-24 bomber specially modified for aerial photography was assigned to the new unit; the nose of the plane was removed and replaced with high-grade glass to minimize any distortion of the film being shot through it. These modifications enabled the OTU to photograph airfields and landscapes as the pilots would see them. In 1944 Russell Lee was promoted to Major and in 1945 he was awarded the Air Medal.

Coal Mine Administration, 1946-47
About a year after leaving the ATC, in 1946, Lee was hired by the Department of the Interior's Coal Mines Administration to take photographs for a major report on health and safety conditions in bituminous coal mines. Lee documented the many facets of each community: company stores and housing, mine interiors and exteriors, medical dispensaries, and everyday activities of residents. He made over 4000 images from August 1946 to February 1947 for the Coal Mines Administration; these negatives are now in the National Archives.
The Department of the Interior used many of Lee’s photographs when, in 1947, it published the final report entitled "A Medical Survey of the Bituminous Coal Industry" and a smaller supplement entitled "The Coal Miner and His Family".

The Lees moved to Austin, Texas, in 1947. At the request of his former FSA chief, Roy Stryker, Lee worked for Standard Oil of New Jersey, documenting the oil industry at home and overseas. Lee continued with industrial photography projects throughout the 1950's, visiting Saudi Arabia and Europe. He contributed to Fortune magazine and was an associate staff member of the prestigious Magnum photographic cooperative. Lee’s negatives taken for Standard Oil New Jersey are now held by the University of Louisville Special Collections.

In 1950, Lee worked with The University of Texas on a study of Spanish-speaking people in Texas. He contributed to the Texas Observer and between 1952 and 1957 covered Ralph Yarborough's election campaigns. His coverage of a 1956 Texas primary campaign appeared in The New York Times.

In 1960, Russell Lee accepted an assignment from the University of Texas at Austin to shoot a portfolio of photographs for a special issue of Texas Quarterly on Italy. Lee spent two and a half months in Italy and shot some 4000 photographs, 150 of which were published in the September 1961 issue of Texas Quarterly. The negatives from this portfolio are currently at the Dolph Briscoe Center for American History.

In 1965, The University of Texas at Austin presented an exhibition of Lee's photographs and he was invited to join the university's art faculty as an instructor in photography. He taught until his retirement in 1973. Russell Lee died on August 28, 1986.